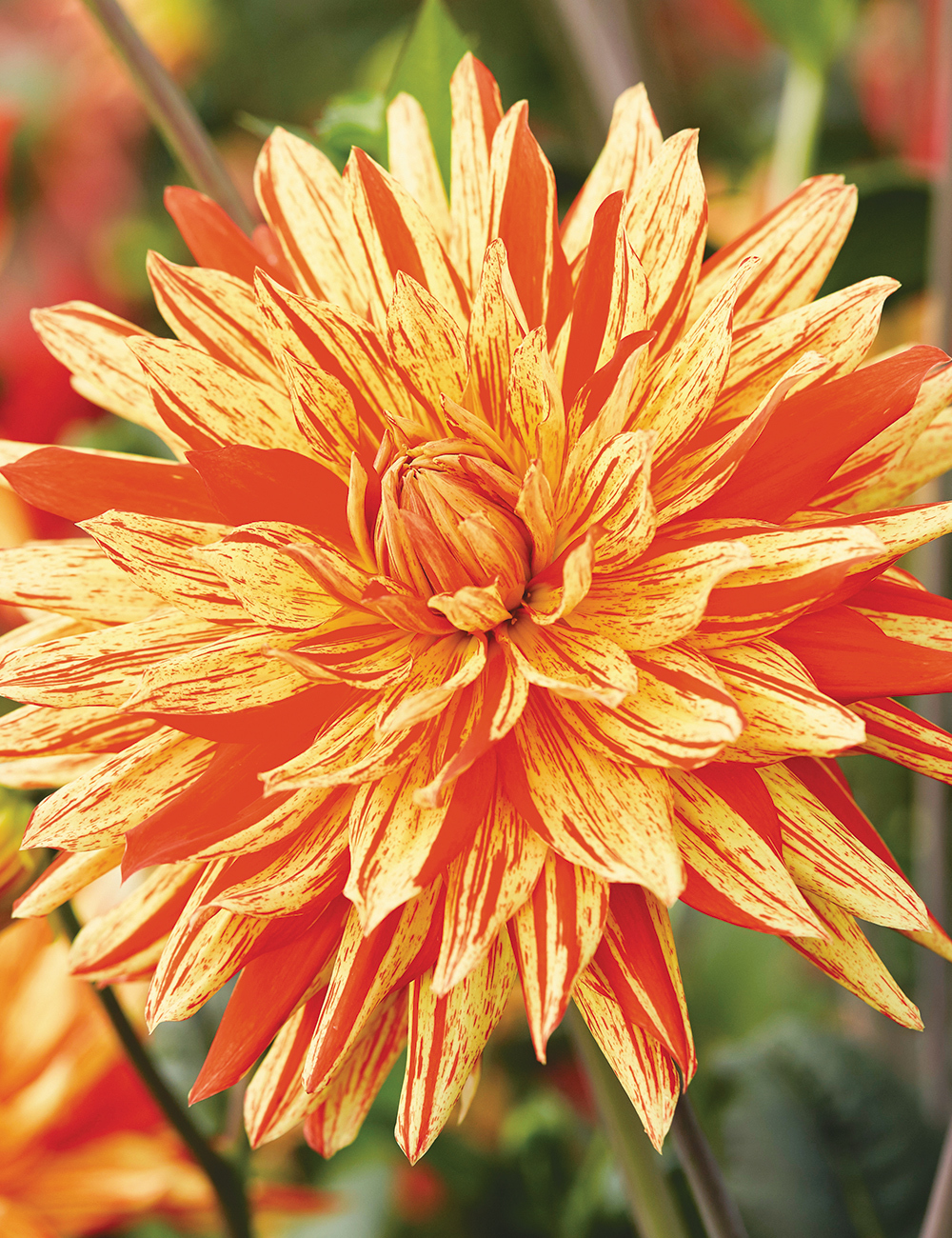 Dahlia ‘Jacqueline’ has vibrant yellow petals with daring flecks of red. A semi cactus type with broader petals. It is shorter growing, reaching around a metre tall, and so is less likely to need staking.

Delbard Dahlias are award winning, abundant, large flowers with an impressive colouring selection and compact, strong growth. The flowers are totally flamboyant and a bit less formal, so more cottage than your average Dahlia.

Each variety is carefully selected, from a trial of over 10 000 hand pollinated seeds, only five new varieties are chosen. From this point it takes another six years to get them to the market. The breeding program began back in the 1940’s and many beautiful varieties have been realised since then.

Dahlias are an absolute delight and make brilliant garden plants. They are long flowering, boast lush foliage, come in a huge array of colours shapes and sizes, what is more they are easy to care for.

Dahlias are so generous with their flowers, it is easy to enjoy them in the garden and to fill your vases. For us, the blooms generally open December to April.

Plant Dahlias into moist, humus rich, well drained soil in a sunny spot, they need at least six hours of sun to flower well – morning sun is ideal as the hot afternoon sun can scorch the leaves. If you have the time, we recommend digging a well rotted cow/sheep manure though the soil prior to planting. Plant the tuber around 5-10cm deep. It is a good idea to stake tall/large flowered varieties at the time of planting to avoid root disturbance later on. Allow a bit of room for air flow between the plants.

You don’t need to water your Dahlias in after planting, just keep them moist once they start to grow above the ground. Adding a slow release tomato fertiliser in early summer and some Sulphate of Potash, then a mulch will help get the best of the blooms.

Dahlia flowers are excellent for cutting, and last well in a vase, and by cutting the flowers you will encourage more blooms. When you cut the flowers, it is a good idea to do it in the morning as they have higher moisture content and so will last longer. Cut the stems so you are taking at least two leaves, this prunes the plant back far enough to encourage more flowers and bushy growth. Any spent flowers left on the plant should be removed as they brown, in a similar method to encourage more blooms. Do this weekly to fortnightly and you will really reap the benefits in a longer bloom time.

Dahlia tubers can perennialise (stay in the ground) if the soil is well drained and you don’t live in areas where the soil will freeze or get overly moist in their dormancy.