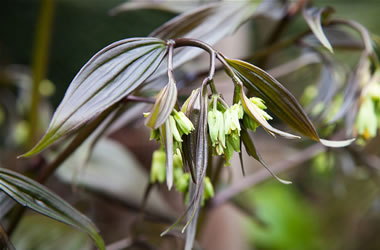 A rare gem for a shaded spot.

The new spring foliage of Disporum 'Night Heron' is a lush burgundy red, almost black. It makes a stunning contrast to the run of the mill garden green. The foliage matures to a purple green for summer, on the straight stems that grow up to 90cm tall.

The flowers of Disporum 'Night Heron' open in clusters at the end of the branches from early summer. They are a soft green to cream. The blooms are followed by ornamental, glossy, purple black fruit (inedible).

Endemic to woodland areas in China it thrives in semi shade in humus rich soils. Disporum 'Night Heron' will gradually colonise through underground rhizomes to form a small clump.

It is semi evergreen but we recommend you cut it back late in winter so the new spring growth is shown to its best potential.