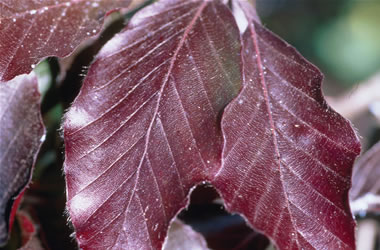 A stand out tree with purple foliage. Copper Beech is a fantastic choice for a bit of garden contrast. The leaves turn bronze in autumn.
Copper Beech grow to form a pyramid shape with branches low to the ground. The bark is initially smooth, but matures with a nice, fissured texture.
With a moderate growth habit, it will take between 30 and 50 years to reach maturity. Copper Beech has a wide, spreading crown. Grow in moderately fertile to humus rich, well drained soil.
Copper Beech is useful for lawn plantings, in parks or for hedging.
Copper Beech has small flowers that open in spring. It is monoecious, which means it has both male and female flowers on the same plant. The male flowers are pendent, while the females are short and upright. The female flowers are followed by spiny bracts containing nuts.
Plant Copper Beech in moderately fertile to humus rich, well drained soils. Acid soils are preferred but not essential. Best in a full sun position.
Copper Beech has a long history, it was first noted in 1488, but was probably around long before. The purple foliage is as a result of a mutation, and it occurred throughout Europe.