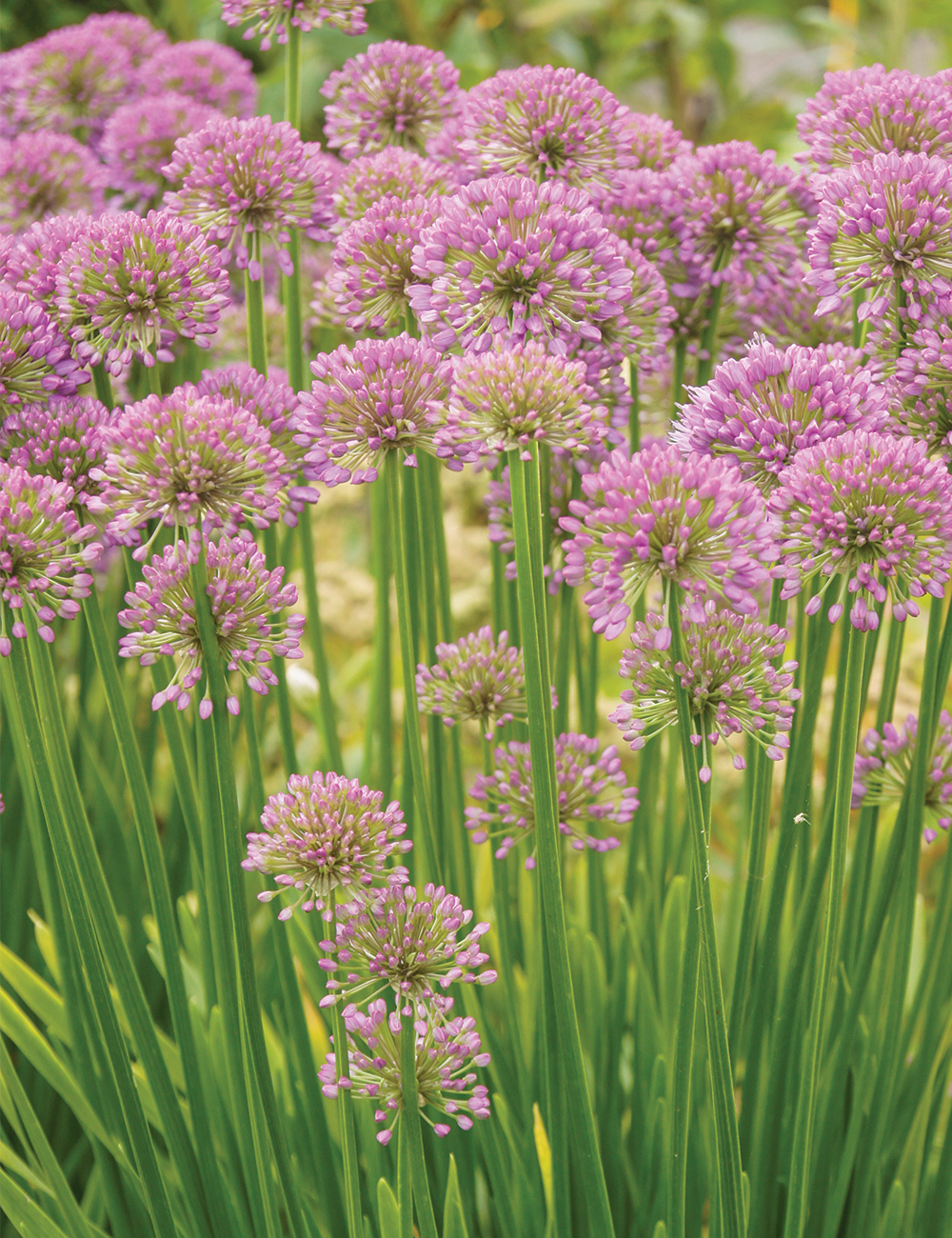 This award winning ornamental Allium is sensational. Once established, it can produce an abundance of 5cm lavender pink globes, each lasting around four weeks. One of the last Allium to open, the flowers are mid to late summer, for us around January/February. Beneficial insects adore them almost as much as we do. Like most Alliums they are perfectly paired with ornamental grasses.
It is quick to form clumps, dry tolerant and later blooming than most. The upright, grass green leaves emerge in spring after winter dormancy and will grow to around 30cm. The flower stems grow up to 50cm, do not produce seed (so last longer) and are excellent for cutting.
Allium ‘Millennium’ won America’s prestigious Perennial Plant Association’s Plant of the Year in 2018. This honour is an indication of its value in the garden. It was raised by renowned breeder Michael McDonough. While not one of his meticulous crosses, sometimes nature knows best, he recognised it as the gem it is. Alliums hybridise rather freely, so the exact parentage of this seed raised selection is a bit of a mystery, but Siberia’s A. nutans and Europe’s A. lusitanicum are amongst them. He named it A. ‘Millennium’ and it is now one of the world’s top selling varieties.
Alliums are tough, hardy, and beautiful too! As members of the onion family, their bruised, or crushed foliage smells just like onions. Largely unsung heroes in the bulb world, it is great to see new Alliums coming to Australia. (This one is more fibrous than bulb though).
Plant Allium ‘Millennium’ into well drained soil in a sunny position. The soil drainage is important as they can rot easily if left in soggy soils. If your soil is poor, adding some lime and compost to the soil prior to planting will give them a good start in the garden.
They originated in areas with hot dry summers and cold winters, and will need at least six hours of sun and a warm spot to thrive. The upright flower stems should be sheltered from strong winds because while they are strong, there is only so much they can do.
Once planted, Allium ‘Millennium’ bulbs are best left to naturalise. This means you can relax and leave them in the ground year after year and just enjoy flowers as they rise each season. Divide every three to four years to maintain vigour and spread the joy.
Our Tip: Plant amongst summer perennials that emerge in time to keep the fading foliage hidden. As with most Alliums, the leaves begin yellow as the blooms take off, or you can just pull them off. It is also a good idea to protect new foliage from slugs and snails as they find it delicious.