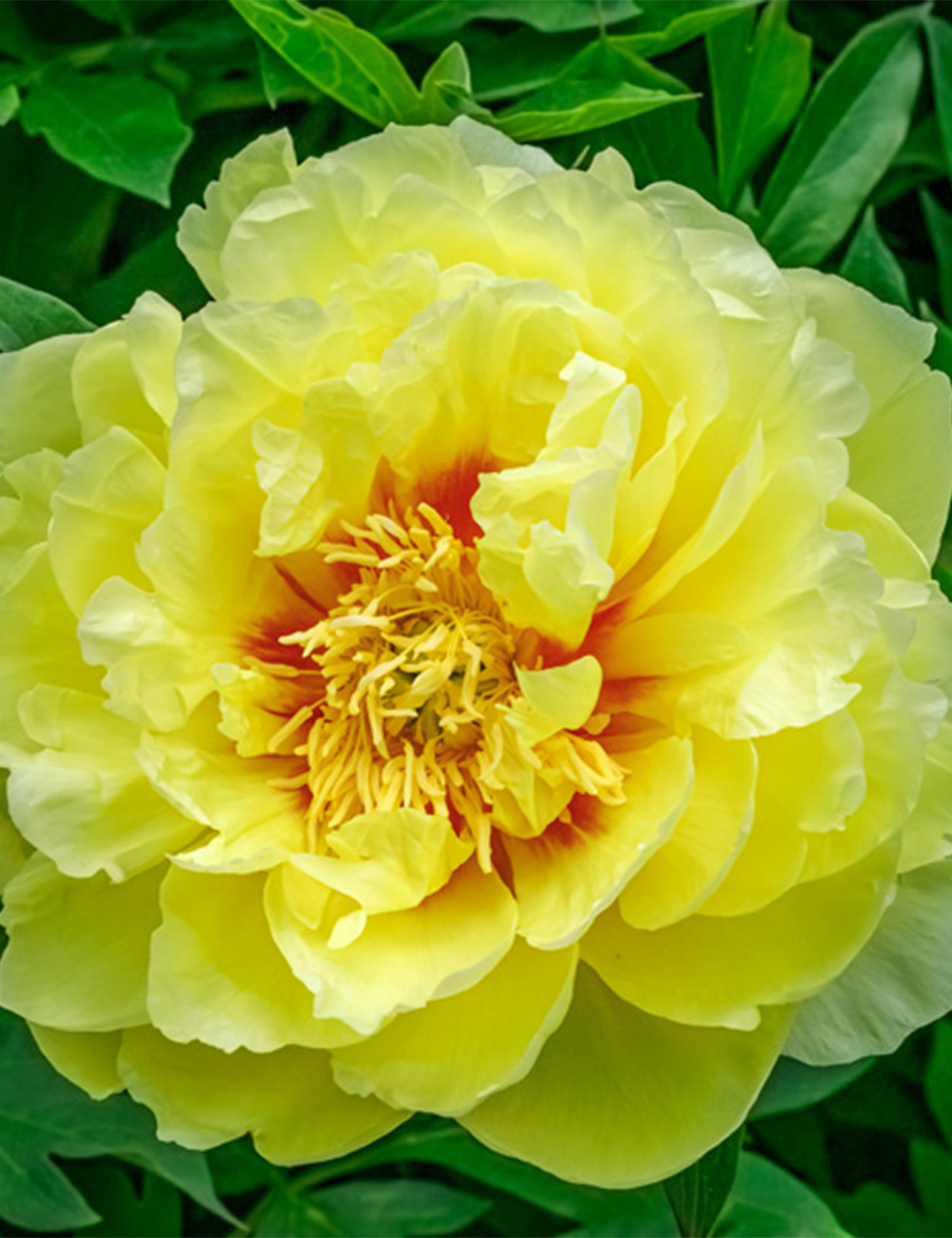 A true treasure, with rich, golden blooms with deeply layered petals with a touch of red at their centre. They open clear of the foliage and the plant produces plenty of side buds, with up to three on a stem and they can open for two weeks or more. The lush, dark green foliage is around often until autumn.

It has taken out many international awards, including Gold and Grand Champion with the American Peony Society, the highest honour a Peony can boast. It has excellent vigour, flowers for up to a month and is quick to settle in and begin blooming. Initially the mid season flowers are single and become semi double as the plant establishes. There can be anywhere from 20-50 petals on each. The flowers have a soft, citrus fragrance and are good for picking.

Peony ‘Garden Treasure’ was bred (using the parentage of the legendary Tree Peony ‘Alice Harding’) in the USA and released in 1984, bred by Don Holingsworth.

Itoh Peonies are an intersectional cross of Tree Peonies, P. lutea and Herbaceous Peonies, P. lactiflora. Toichi Itoh of Japan was the first breeder to successfully combine the two and they are named in his honour. They are easier to care for and have lovely, lush foliage that lasts longer and stronger stems. They are also more forbearing of heat and humidity so a good choice to trial if you don’t get frost.

The exotic flowers of Peonies have been cherished since the 5th century and during their long and illustrious history, Peonies have been the flower favoured by Emperors and Gods. Fortunately, they are now accessible to the common gardener.
Peonies are vigorous, long lasting garden plants that will likely outlive with opulent blooms that make wonderful cut flowers. Once established, you can enjoy up to 50 can open in a season.
You will have to be patient to enjoy the flowers of Herbaceous Peonies as they establish their roots – they have big blooms to fuel. Mature plants can have a root ball that weighs almost 30kg and stretches up to 90cm. But the wait will be justified for many years to come as they are extremely long lived.
Peonies are heavy feeders, so you need to fertilise them regularly. They like lime, and lot’s of it, so be sure to indulge them. Plant your Peonies just beneath the surface with around 2cm of soil covering them. Too deep and they won’t flower for you.
Peonies need cold winters (3-7C nights at least for around six weeks) for best flowers.
If your climate doesn’t get that cold, but you still want to try your luck, Tree Peonies need a bit less cold. As a general rule, if apples can grow in your climate, so can Peonies. To give them the best chance in warmer climates you should seek out a cool spot to give them the best chance, with shelter from the hot afternoon sun and you should mulch well (but not too close to the tuber it needs to remain shallow). If they aren’t going dormant, to have the winter rest they require, you can force them into it by cutting them back hard in early winter.