The Tulip as Persian folklore

The Tulip is truly an extraordinary flower. It has a past steeped in legend and has been a muse for art and poetry, it has obsessed nations, and enthralled sultans. Here is one of the quixotic legends of its origin.

In Persian folklore, the first Tulip is said to have bloomed from the blood of star crossed lovers, Farhad and Shirin, in a tale reminiscent of the infamous Romeo and Juliet.

A lowly stone cutter, Farhad, loved the Princess Shirin, and wanted to win her heart. When she heard of this, she would have none of it, and would not even see him, what would she want with a lowly tradie!?

So Farhad took to the hills with his flute and made beautiful music in praise of Princess Shirin. He fasted as he pined for his love, and soon the villagers made him the talk of the town. They saw Farhad’s plight and felt for him, so they conspired that the two should meet.

Princess Shirin was led into the mountain’s forest by her courtesan and when she saw Farhad and heard his music, she fell in love.

When her father, the Shah heard that his only daughter had fallen for someone beneath her he was not happy. He could see that she loved him, but was adamant that she should not. He was no dummy, he knew if he told her no, then he may lose her, so he devised a clever plan.

He decreed that Farhad, being a commoner, must complete a task, a task that no man could complete. A task that heroes would run from, and only if he was able to do this could he have any hope of ever being with his beloved princess.

Now, you might think that that is clever, but it is not the best bit. He had Shirin ask this of Farhad, as a task she wanted complete.

So Princess Shirin went to Farhad and asked  him to dig a canal through the bedrock of the hills. Not just any canal mind you, it had to be six lances wide and three lances deep, oh and forty miles long! She appears quite high maintenance by today’s standards!

Farhad didn’t blink, he loaded up his spade and headed for the hills.

He laboured tirelessly for years. From dawn to dark he worked his spade, building the canal, and he was making real progress. The princess would visit, in secret to watch him work, falling deeper and deeper in love – he must have been rippling with muscles by this stage!

Word reached the Shah that Farhad had almost completed his task. The clever trick was not going to plan. The Shah sought council from his cunning Viziers. Together they plotted to send one of the princesses courtiers to tell Farhad that Shirin was dead, hoping that with a broken heart he would give up and go away.

So the courtesan was sent to tell Farhad that the princess was dead. He did not believe her, but was eventually convinced. Then, overcome by grief, Farhad used his spade to take his life, and his blood flowed into the canal.

Things didn’t go according to plan

When news reached Princess Shirin she ran to the mountains to see if it was true. Upon seeing him, she then took her own life. Where they lay together, their scarlet blood pooled, and each drop formed a tulip. Ensuring their love will live forever. 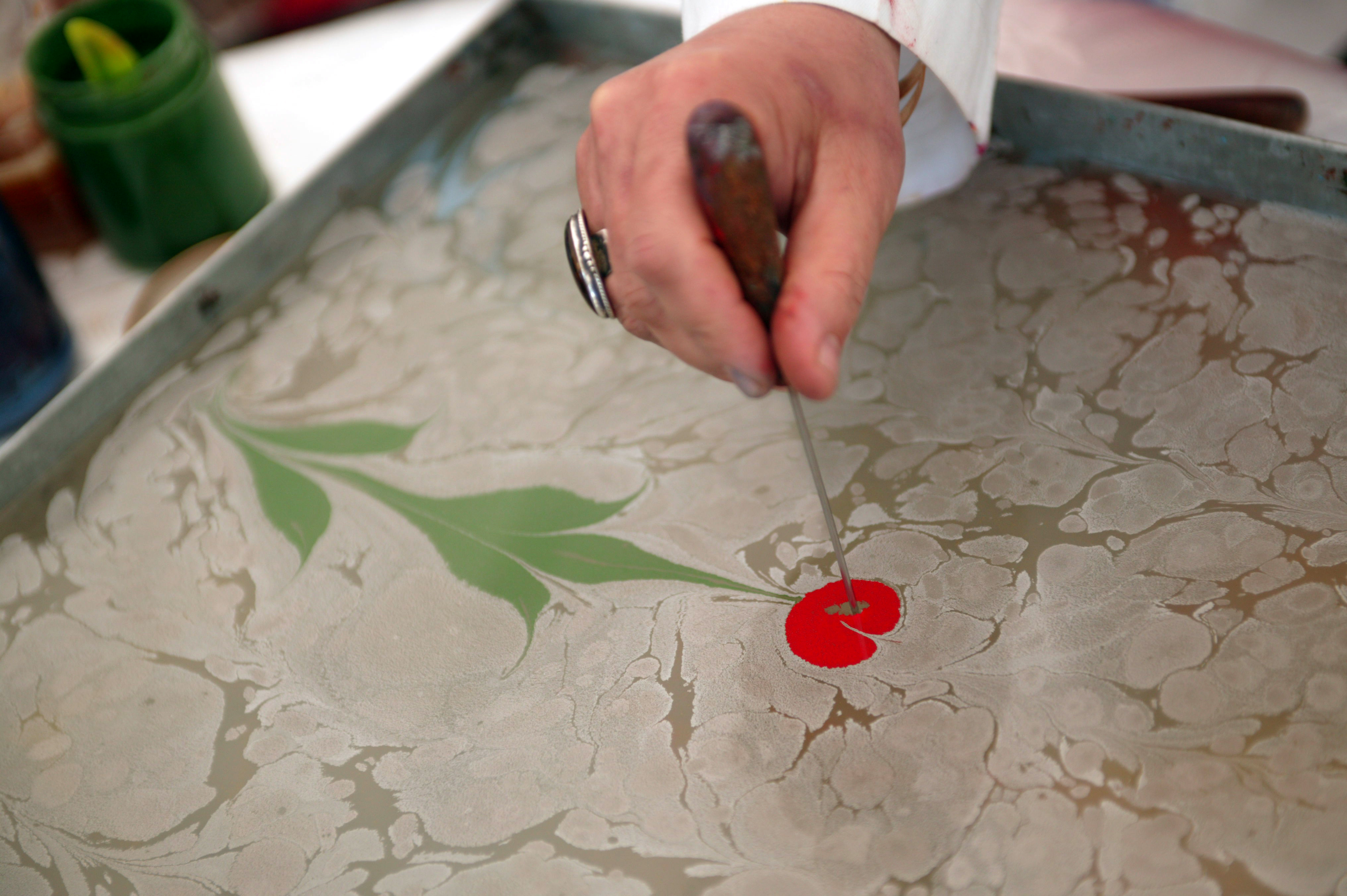 A tragic tale. There are many versions of this story, each with the same sad ending, thus linking love and tulips forever.

We would like to thank Mrs Munevver Ucer for providing us with the main image, or to view her work, click: http://www.ktsv.com.tr/sanatkarlar/136-munevver-ucer